Not only the exponential growth in the ways and means by which people need to communicate such as voice, data and video but also the need for larger and growing bandwidth are requiring wideband, flexible and programmable technology. Software defined radio (SDR) technology brings the flexibility, cost efficiency and power to drive communications forward. In fact, an efficient SDR relies on flexible and wideband RF Front End as well as programmable and open access high speed baseband unit for signal processing.

This application note aims to present Nutaq’s SDR-based LTE network-in-a-box solution and how it can help mobile virtual network operator (MVNO) to prepare the transition to Full MVNO model. On the one hand PicoLTE is based on a wideband and flexible remote radio head (RRH) and a powerful base band unit (BBU) running a fully software implementation of the LTE eNodeB and EPC. The solution can be used not only for learning and teaching LTE but also to setup private LTE network, UE conformance test and measurement. Furthermore, PicoLTE is a compact and flexible LTE network–in-a-box (NIB) that can be used to enable full control of LTE radio and core network for MVNO and pave their way to the ultimate dream of being a full MVNO.

A mobile virtual network operator (MVNO) is a company that provides mobile phone services but does not have its own licensed frequency allocation of radio spectrum, nor does it necessarily have the entire infrastructure required to provide mobile telephone service. A company that does have frequency allocation(s) and all the required infrastructure to run an independent mobile network is simply a mobile network operator (MNO). An MNO that does not have a frequency spectrum allocation in a particular geographical region may operate as an MVNO in that region relaying on the network infrastructure of another MNO.

The MVNO’s roles and relationship to the MNO vary by market, country and the individual situations of the MNO and MVNO. In general, a MVNO is an entity or company that works independently of the mobile network operator and can set its own pricing structures, subject to the rates agreed with the MNO. Usually, the MVNO does not own any GSM, GPRS, CDMA, LTE or other core mobile network related infrastructure, such as mobile switching centers (MSCs), or a radio access network. Some may own their own home location register, or HLR, which allows more flexibility and ownership of the subscriber’s mobile phone number – in this case, the MVNO appears as a roaming partner to other networks abroad, and as a network within its own region. Some MVNOs run their own billing and customer care solutions known as business support systems (BSS).

MVNOs, who have gained considerable part of the mobile market, thanks to a strategic approach, must today face a decline in profitability. To continue their growth MVNO should think about the “Full MVNO” model. The objective of this model is to offer the MVNO maximum independence from the MNO host, to control its strategy. In particular, the “Full MVNO” model allows MVNO to use different MNO hosts in one or more countries, being able to consider them as mere providers’ of network traffic.

Full MVNOs should also allow MVNO to build their own cellular radio infrastructure. In this context, MVNOs can go a step ahead by building their own flexible and scalable LTE/4G infrastructure based on affordable SDR-based LTE network-in-a-box solution and have the full control of the of the link from the UE to the P-GW.

Nutaq’s PicoLTE is a compact, standalone and flexible LTE network-in-a-box. It is a combination of flexible wideband RRH and a software-based implementation of both LTE eNodeB and EPC running on a powerful BBU allowing easy updates and support of latest 3GPP features.

LTE eNB is a LTE base station (eNodeB) implemented entirely in software and running on a standard computer. The PC generates a baseband signal which is sent to a radio front-end (RRH) doing the digital to analog and RF up conversion. The received signal by the RF frond-end (RRH) is down converted to the baseband. The digitized I/Q samples are then streamed in real time by the FPGA to the PC over PCIe. The samples are then processed and decoded by the eNodeB BBU.

LTE eNB interfaces with a LTE Core Network through the standard S1 interface. The Core Network software (LTE MME) can easily be connected to it to build a highly configurable LTE network-in-a-box.

Third party EPC can also be interfaced within the eNB to build a private LTE network due to the standard interfaces of the eNB such as S1-MME, S1-U, X2-AP which are fully compliant with 3GPP specifications.

For specific requirements OpenEPC can be used for further customisation within the eNB to build a private LTE network.

PicoLTE can be used as a standalone LTE NIB running on the same box based on a Quad Core i7 CPU and Linux OS both eNB and EPC as depicted in figure 1. The EPC has a built-in MME, HSS, S-GW and P-GW enabling a rapid setup of the system. The MVNO can then control the list of subscribers through the configuration files of the HSS. 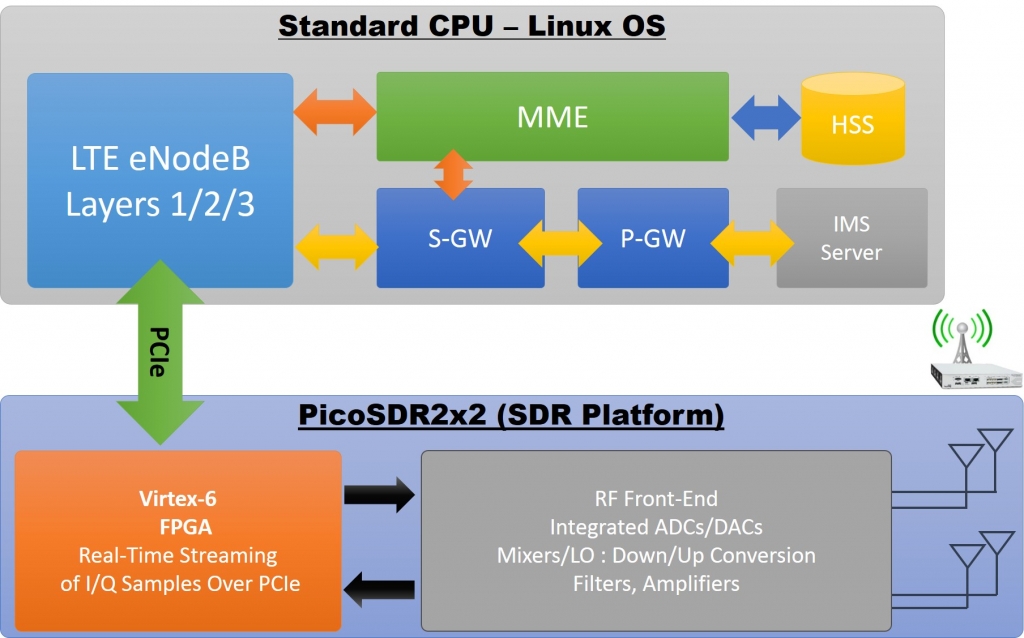 As a service provider a Full MVNO will ideally build a LTE network using multiple eNBs sharing the same EPC. Therefore, the LTE eNB ad LTE EPC should be implemented as separate components and run on different processing units while they are sharing the same backhaul network ideally- through gigabit Ethernet connection. The SW-based highly reconfigurable and flexible LTE stack of the PicoLTE supports both eNB and EPC as separate packages as mentioned above. Hence, one can deploy different eNBs running on different PicoLTE units, connected to the same Ethernet network as the EPC. The latter can be installed on a standard host computer with no need for radio cards (figure 2). The EPC will then handle all the signalization and data exchange with the subscribers registered on different cells in different geographic areas.

The PicoLTE’s eNB supports 3GPP X2 interface and can then handle LTE handover between different cells. 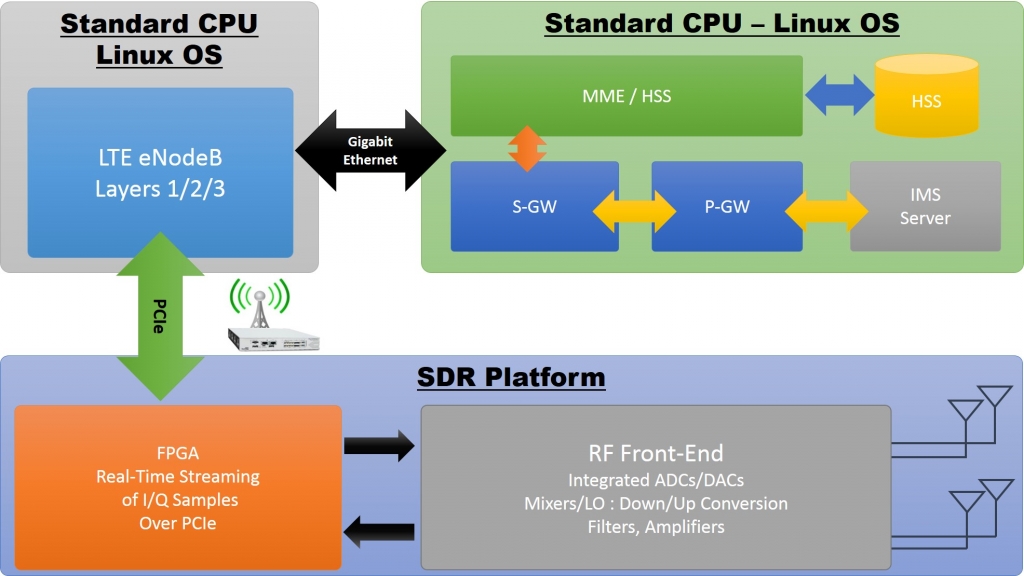 As a result of separating eNB and EPC components one can deploy easily and in a few minutes the multiple cells LTE network illustrated in figure 3. Each LTE cell can support multiple subscriber up to 100 simultaneously. 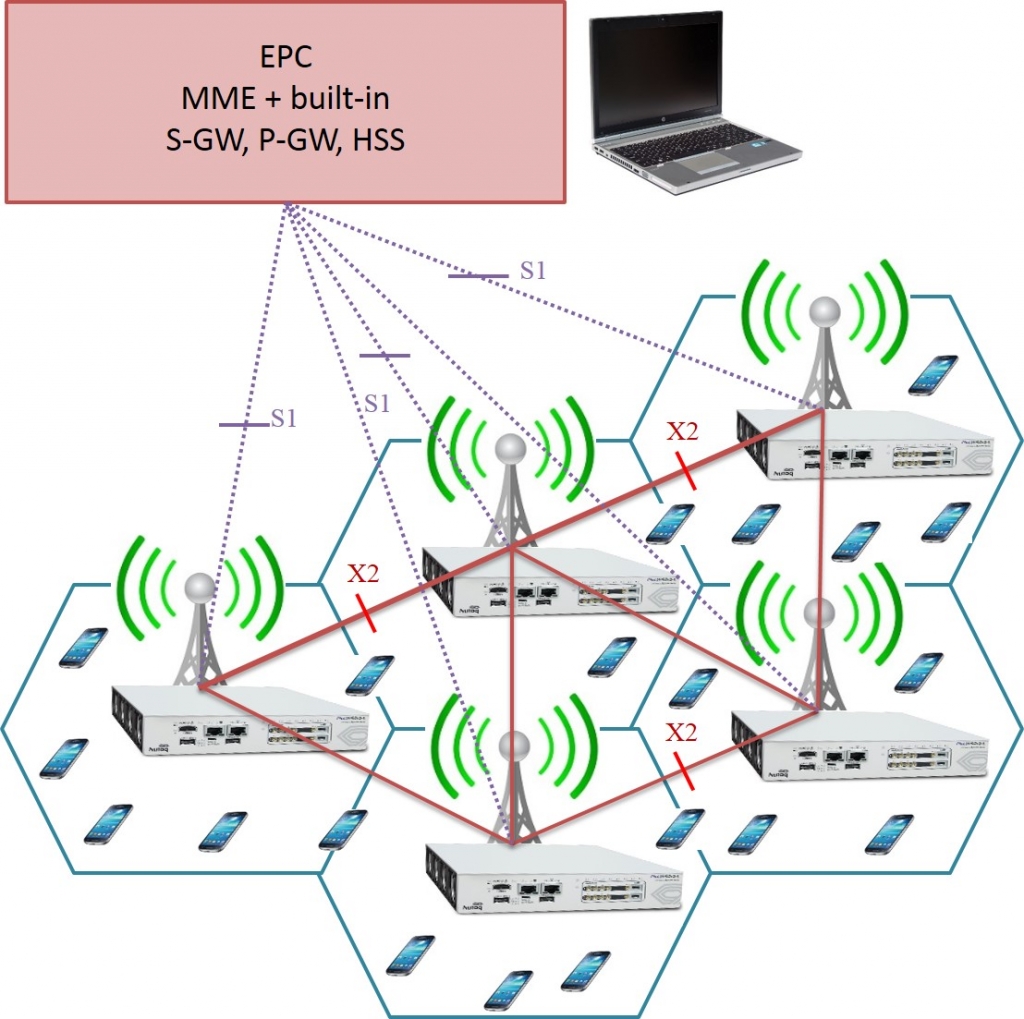 To accelerate transition from MVNO to Full MVNO model, MVNO can focus on the small and femto cell deployment of LTE network while using the wired telecommunication infrastructure of MNO. PicoLTE is a powerful, flexible and affordable LTE network-in-a-box solution that can help MVNO to prepare an efficient and reliable transition to their own LTE radio access network while they have the possibility of customizing and building specific features in the core network for more added value.